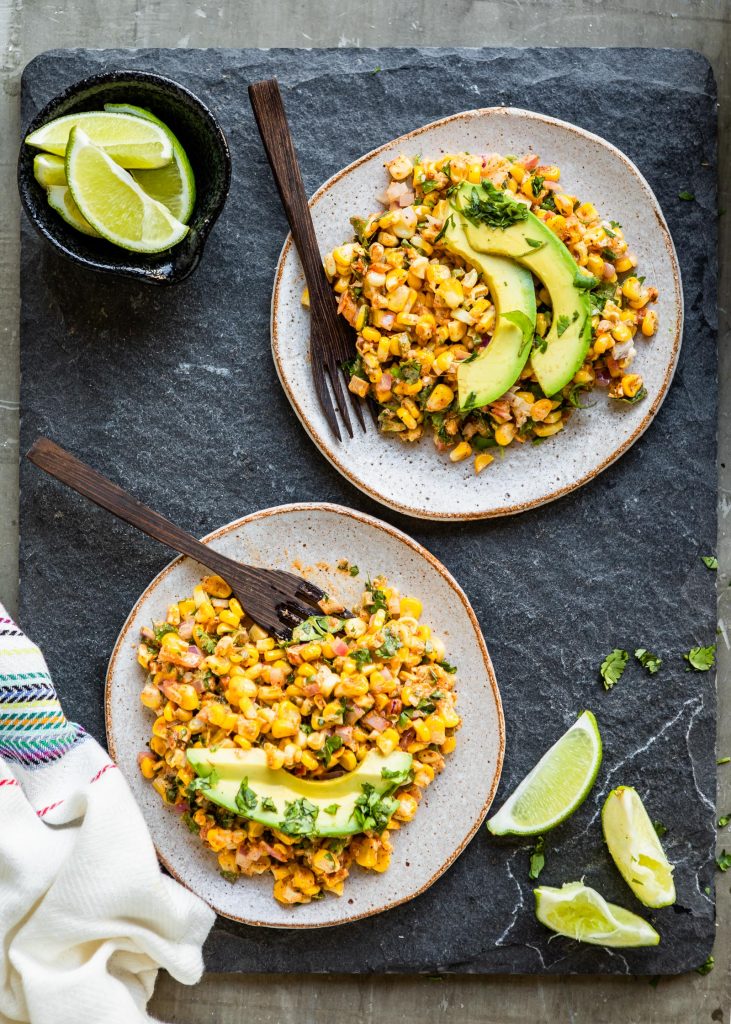 Summer corn is something I look forward to every single year. There’s nothing quite like biting into a juicy cob of just-picked corn. I live smack dab between the city and numerous farms. I drive by fields of corn on a regular basis, anticipating the time when they corn stalks are as tall as I am and loaded with ripe corn. This Vegan Mexican Corn Salad capitalizes on fresh, summer corn, but can also be made with frozen corn during the rest of the year. 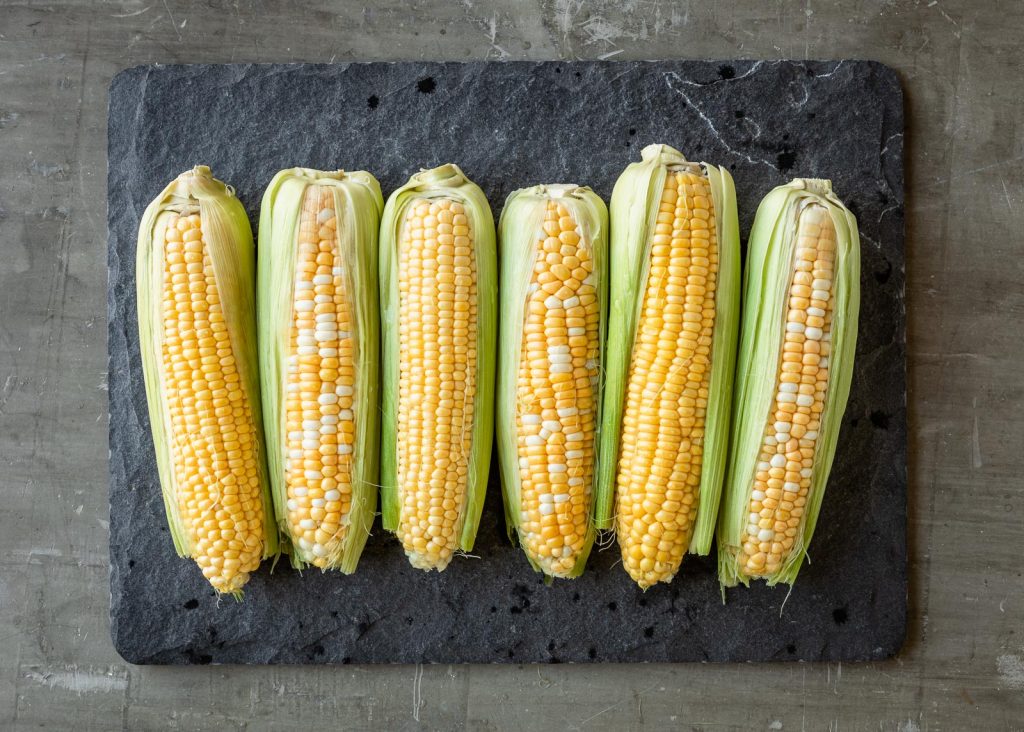 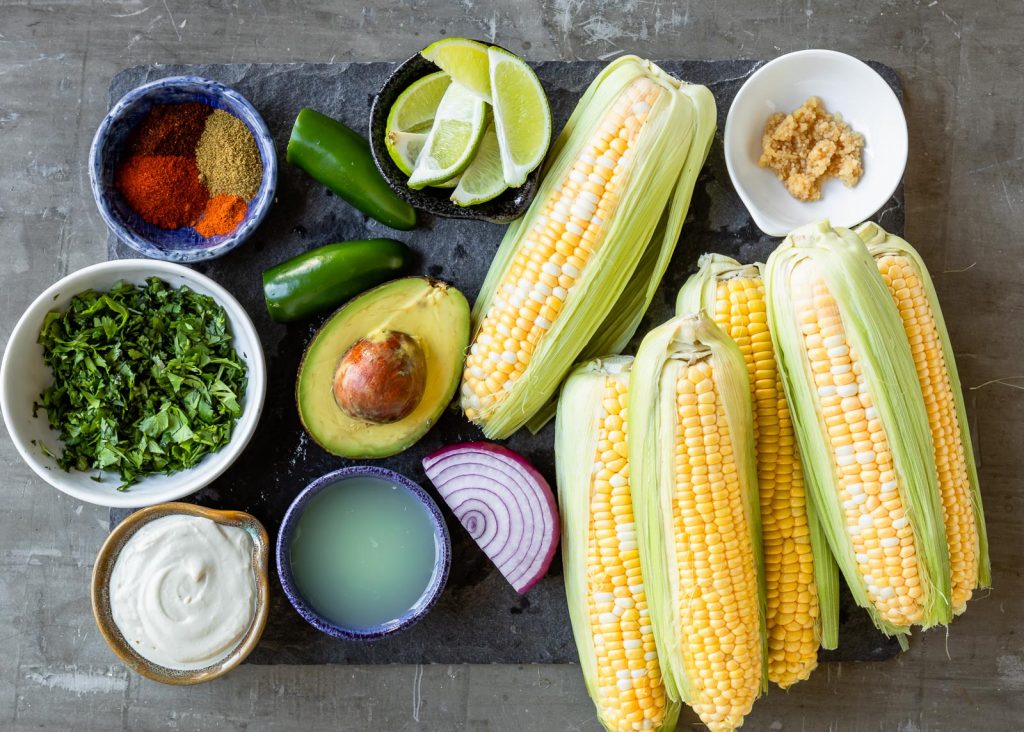 Traditional Mexican Corn Salad contains diced green chiles, onion, an array of spices, fresh lime juice, cilantro, and a creamy sauce. Everything is topped with salty, crumbled Mexican cheese. We’ve swapped the mayo and sour cream for cashew cream, but you could easily use vegan mayo or vegan sour cream. Cashew cream is kinda my jam. And because I’ve nixed the cheese, I added some sliced avocado. 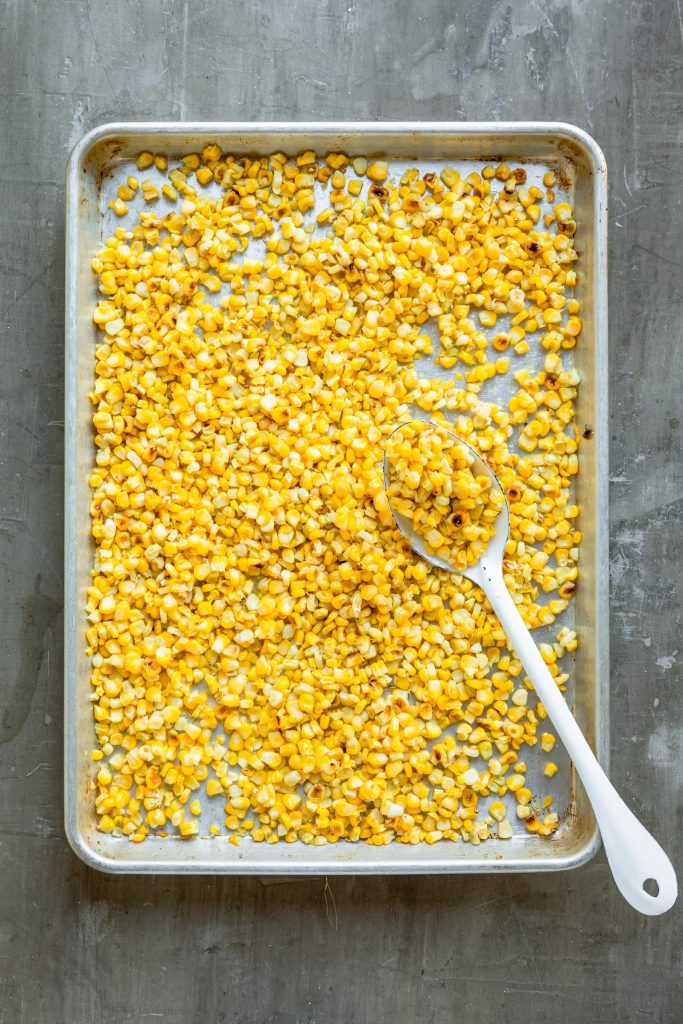 Let’s talk about how to prep the corn. Typically the corn in Mexican Corn Salad is sautéed in butter. The corn can be cooked before or after removing from the cobs. I’ve boiled, roasted, and grilled the corn first. My favorite quick way is to cut the kernels from the cobs using a rimmed baking sheet to catch every last kernel. I drizzle the corn with a little olive oil and broil it for about 5-6 minutes, or until the corn starts to turn golden with some blackening around the edges. I also turn the corn kernels over halfway through broiling so the corn cooks evenly. 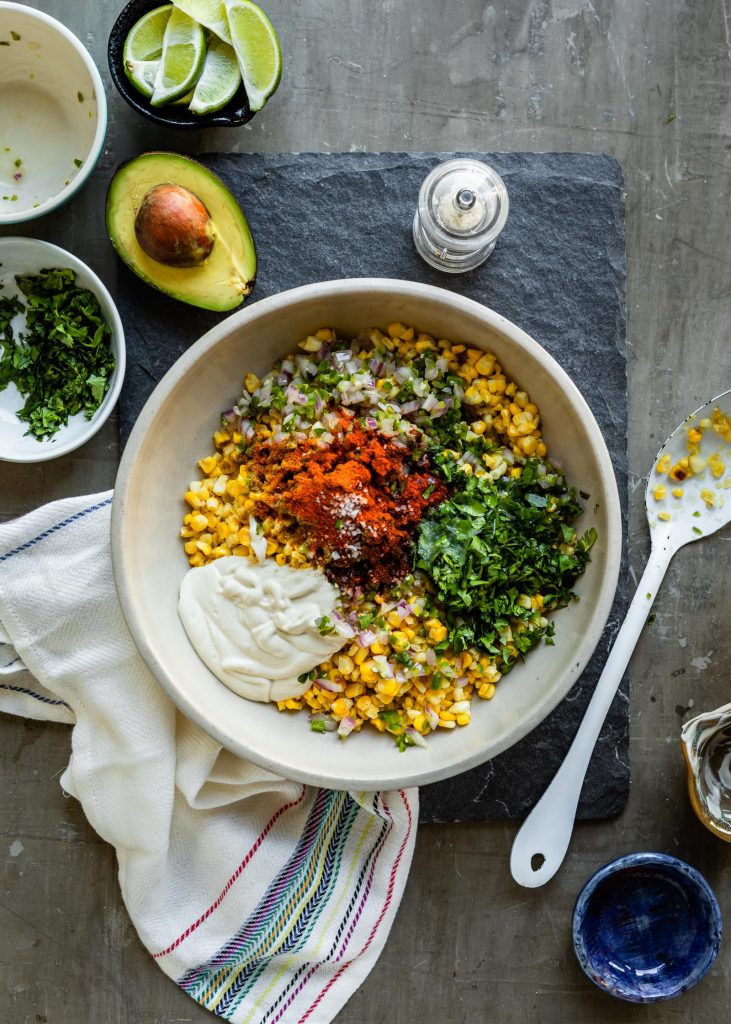 I prefer to sauté the onions, jalapeño, and garlic but that is an optional step. I’m careful to keep the aromatics to crisp because I like the crunch of the onions and jalapeño and the vibrancy of the flavors – that little bit of sautéing just takes the raw edge off. Leaving the jalapeño ribs and seeds intact will add to the spiciness. For extra flavor and a bit more heat, I use a combo of chili powder, smoked paprika, and a good pinch of cayenne. That hit of spice with the tangy lime juice is sheer perfection. 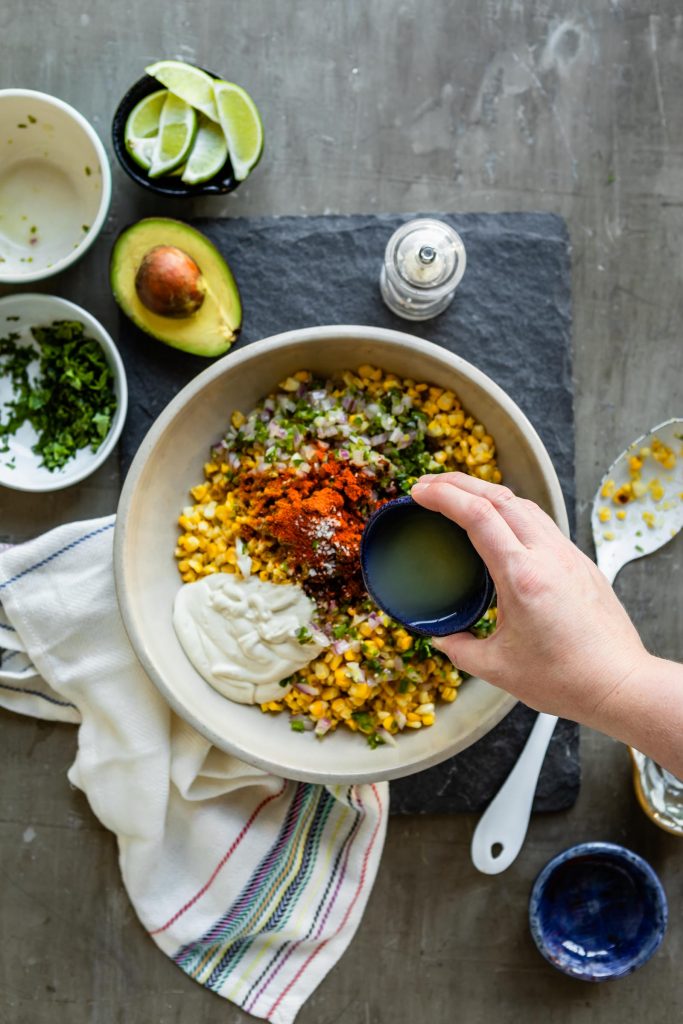 It’s really a simple salad to put together and can be used in myriad ways other than as a side dish. It makes a great topping for loads of Mexican dishes or even veggie burgers. Serve it up as a type of dip with chips. And hopefully a margarita on the side. 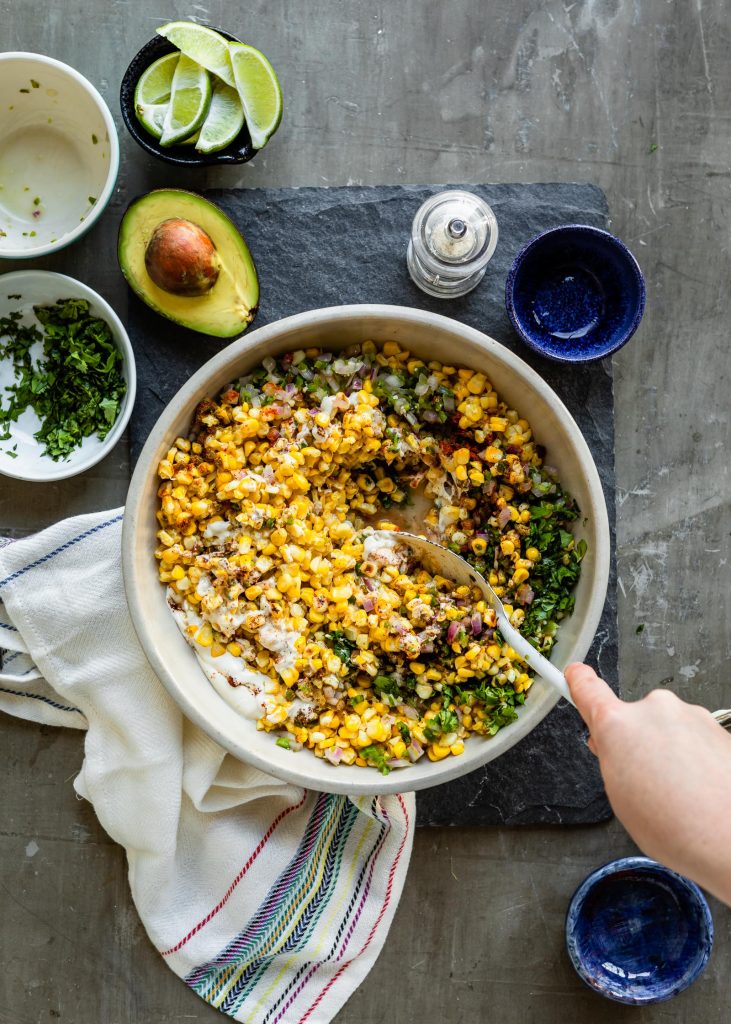 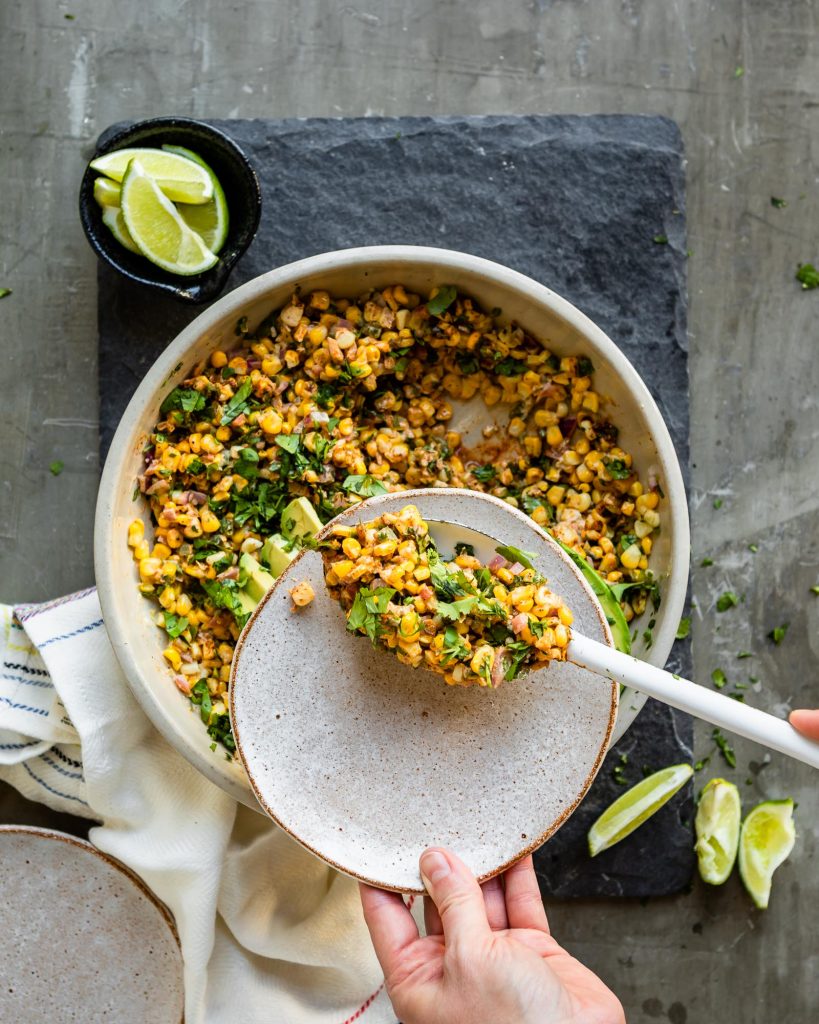 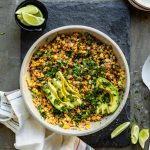 A plant-based take on the favorite Mexican salad, made with fresh corn, jalapenos, and a creamy cashew-based sauce. Recipe adapted from The Kitchn's Esquites (Mexican Corn Salad). 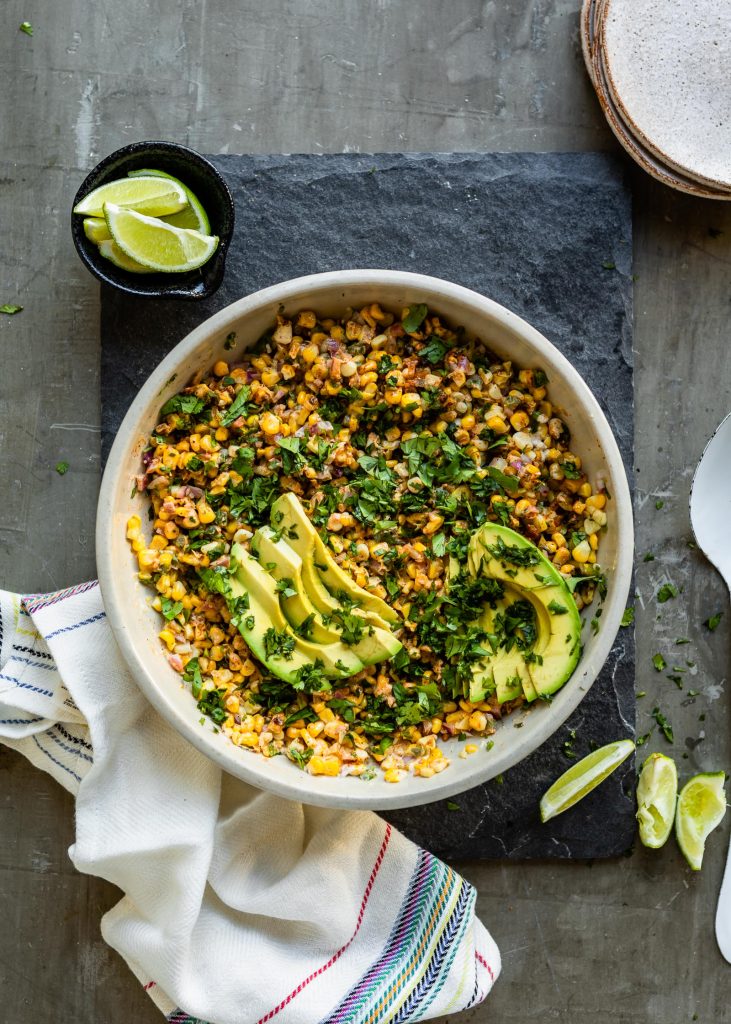